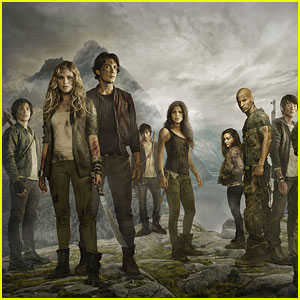 About the Show: The series is set 97 years after a devastating nuclear war wiped out almost all life on Earth. The only known survivors lived on 12 space stations in Earth’s orbit prior to the war. The space stations banded together to form a single massive station named “The Ark”, where about 2,400 people live under the leadership of Chancellor Jaha. Resources are scarce, so all crimes – regardless of their nature or severity – are punishable by ejection into space (“floating”) unless the perpetrator is under 18 years of age. After the Ark’s life-support systems are found to be critically failing, 100 juvenile prisoners are declared “expendable” and sent to the surface – nearby former Washington, D.C. – in a last ditch attempt to determine if Earth is habitable again, in a program called “The 100”, for which the show is named. The teens arrive on a seemingly pristine planet they have only seen from space. They attempt to find refuge and supplies at an old military installation, Mount Weather Emergency Operations Center, located in the foothills of the Blue Ridge Mountains. However, they land some distance from the intended target and soon face other problems. Confronting both the wonders and the dangers of this rugged new world, they struggle to form a tentative community. They soon discover that not all humanity was wiped out – some people on Earth, called Grounders, survived the war, and there are more dangers lurking: Reapers (Grounders who have become cannibals) and Mountain Men (who live in Mount Weather, The 100’s original destination).

The 100 Soundtrack Season 4 Songs – Tracklist – Listen to the playlist of all of the songs played in the tv show, who sings them, including end credits and scene descriptions.